Important: This is general information, based on the best available data at the time of writing. Do NOT rely on or use this information as a substitute for professional medical advice.

Rosacea is a chronic vascular disorder affecting the facial skin and eyes. Symptoms, of varying severity can include; a predisposition to reactive flushing; redness; pronounced skin sensitivity; telangiectasia (appearance of red blood vessels on the skin surface), papules and/or pustules. Rosacea is often is characterised by a chronic cycle of remission and flare. The facial skin of patients with rosacea is often hyperirritable.

The underlying causes and the progression of rosacea have not yet been firmly established. Recent findings implicate the immune system; as well as vascular abnormalities, genetic influences and infectious factors.

Objectives diagnostic tools are also lacking; as yet, there is not any clearly defined histologic or serologic markers of the disease.

Because rosacea pathogenesis is so poorly understood, therapies are focused on managing symptoms rather than treating the underlying disease.  Both oral and topical antibiotics, and anti-inflammatory medications can be prescribed. Use of non-irritant emollients helps to improve barrier function and provides a physical barrier to the ingress or irritants and trigger substances; as well as redressing symptoms of dryness.

A growing body of literature suggests that suitable moisturising and emollient products can play an active role in improving skin homeostasis and redressing deficient stratum corneum barrier function; they can be useful non-medicated interventions in the treatment of various skin conditions including rosacea. The aim of topical emollient therapy is to improve the condition of the skin by providing physical, structural and physio-chemical elements that enable the skin to more effectively retain moisture. By normalising the skin, intrinsic defensive responses such as redness, itch and inflammation are minimised and more normal skin biochemistry is achieved.

Important Instructions for Use:

This cream is not medicated, however it contains substances that physically interact with the skin and may influence the way in which some other topical medications work. Your doctor will advise on how Graham’s Natural Rosacea Cream can be used in conjunction with medicated therapies.

Grahams Natural Rosacea Cream contains a range of naturally derived and purified ingredients considered suitable for the topical use by most rosacea sufferers, as well as the general population; however this does not preclude the possibility that it may trigger to personal sensitivity reaction in particular individuals.

PATCH test the product by placing a small amount on normal, healthy skin; if after several hours there is no irritation or redness, proceed to application to rosacea-affected skin.

IF at any time during the use of this product you experience atypical redness, sensitivity or other adverse reaction seek medical advice.

For rapid relief from flushing and improved skin comfort on application, you can store this cream refrigerated.

Test Sensitivity First:  Use as a cleansing, ‘cold cream’. Pat sparing onto skin affected by rosacea and then rinse off using tepid running water, pat dry with soft towel. Follow up with your usual skincare regime.

For Routine Use: Can be used as a (rinse off) cleanser as well as a soothing (leave on) treatment moisturiser. For best results apply to generously to areas affected by and susceptible to rosacea at least 2x daily. Follow up with your usual skincare regime. This product does not contain a sunscreen.

If symptoms persist contact you medical practitioner. Tell your doctor you are using this cream.

About this formulated medical device:

Grahams Natural Rosacea Cream is intended to help to normalise the appearance, structure and functionality of the epidermis by providing a low–irritant moisturising treatment and an emollient protective barrier. It is intended for local application, where/when the epidermis is impaired; is susceptible to or has been affected by local inflammation; such as sensitivity, erythema (redness), telangiectasia (appearance of red blood vessels on the skin surface) and papules, and/or pustules. It is non-sterile; and not intended for application where the dermis has been breached.

On initial application, Grahams Natural Rosacea Cream moves softly and easily across the skin without drag. As the moisture, low molecular weight lipids and constituent are gradually absorbed, it leaves a non-sticky, smooth protective finish.

Most users will find that it is non-sensitising and non-stinging; however sensitivity and severity of rosacea symptoms can vary widely. It may be that even this very mild formulation could trigger uncomfortable tingling when first used. For this reason, we recommend its initial use as a rinse –off cleanser, until such time individual sensitivity and skin reactivity has been tested.

Grahams Natural Rosacea Cream can be stored refrigerated so that the cool sensation also helps to ameliorate sensitivity.

Once you have determined that this product does not cause discomfort, it is recommended for frequent (ie at least 2x daily) use as both a cleanser and as a leave on moisturising treatment.

Abnormal skin barrier homeostasis has been demonstrated in rosacea patients; evidenced by increased transepidermal water loss (TEWL) and increased sensitivity. Patients with papulo-pustular rosacea have a more alkaline facial skin and reduced epidermal hydration levels. In addition, they have reduced levels of sebaceous lipids, known to contribute to the barrier function of the stratum corneum.

This “complex cream” has been formulated using a range of biocompatible lipids conducive to supplementation of emollient and structural lipids in the stratum corneum. These include complex esters, naturally occurring hydrocarbons and both saturated and unsaturated fatty acids, over wide range of chain lengths. Complex creams are typically more effective at reducing transepidermal water loss and normalising skin capacitance than are simple or single source lipid creams.

Maintenance of a correct equilibrium state of stratum corneum hydration has a positive impact on its mechanical and optical properties, as well as helping to maintain skin barrier function and playing an important role in the regulation and activation of both intra- and extracellular enzymes, responsible for normal skin functionality.

Staphylococcus epidermidis and other opportunistic pathogens are often observed in rosacea prone skin and flare up.  Antimicrobials that impact the cell wall and/or metabolism of these organisms are also often irritants, and are thus counter indicated in rosacea management products. Grahams Natural Rosacea cream is not an antiseptic, however care was taken in selecting ingredients to ensure that they are both kind to sensitive skin and are unlikely to serve as an energy or nutrient sources for skin bacteria.

Skin is a major target of oxidative stress, a consequence of the presence of (free radical) reactive oxygen species (ROS) originating from both the environment and from skin metabolism. Healthy skin counteracts ROS with natural anti-oxidants, however increased or prolonged presence of free radicals can override these defence mechanisms and trigger inflammatory cellular responses. ROS remediation has been proposed as the remedial action perpetuated by some prescribed medicinal treatments, typically effective for rosacea symptoms.

Osmo-regulating substances with a range of functions and actions have been included.

This product has been manufactured in Australia, under GMP using (excipient, non-drug) pharmaceutical and topical/food grade ingredients. Store below 25oC, in closed original container, may be refrigerated. If the cream develops an atypical odour or changes in consistency it is important NOT to use it. Discard and replace as merited.

We have 3 nine year old Labradors and noticed that our largest Chocolate Labrador was looking a little stiff in his legs. We have noticed the biggest difference in his mobility . He is moving freely and running around again. The other 2 look more vibrant too . This is after 1 month. Highly Recommend this product

excellent products, they do as advertised

Hi Jennifer,
Thank you so much for your review on our Intensive Repair Hand Cream! :)

works provided itch is moderate otherwise it is a good moisturiser. But it is better than anything else that I used.

I have to say I was skeptical of any cream in general that has anything to do with healing eczema; however, this cream has worked wonders on my little one’s skin. I see healing & less scratching. It’s been a slow progress but I see his skin has improved so much. It is starting to smooth out. We still have our flare up days but it’s nothing like before. Now we are able to manage it with the cream. It’s a slow progress but I see a big difference and that’s all I could ask for. We will continue to buy & use this cream, as it is the only one that’s been working on his skin so far. attached are the before & now pics. 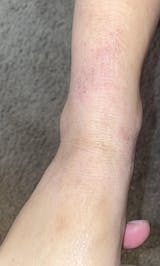 Thank you so much for your review and taking the time to show us your before and after pictures! We are so happy to hear that you are seeing a difference in your skin :)

Thanks you so much for the cream.

Hi Rajadurai,
Thank you for your review :)